Between Motor and Mobility | NTT DATA

Between Motor and Mobility

Digitalisation – the engine of far-reaching changes

Cloud, mobile internet, social media – we are constantly on line, connected with everyone and everything, and have a world of information at our fingertips at all times and wherever we are. Digitalisation is on the upswing and affects customers’ expectations and values with regard to mobility and transport just as it affects cooperation with suppliers and service partners. It is therefore important that OEMs digitalise their products as well as the entire process from product development to production and all the way to distribution, maintenance and customer support. As Marc Benioff, CEO of the leading cloud provider Salesforce, says: “If you don’t move, you’ll be “Uber”-taken”.

One of the principal drivers of digitalisation is the cloud, which enables huge volumes of data to be stored and accessed at all times and from any location. It is thus the prerequisite for digitalisation, the Internet of Things (IoT) and Industry 4.0. It provides momentum to technical innovations, which, in turn, spur on digitalisation. 3D printing, which could even revolutionise the automotive industry, is an example of this.

While the industry is still waiting for self-driving cars, the next technical revolution is just around the corner: 3D printed vehicles. A car that was made using a 3D printer was presented at the International Manufacturing Technology Show in Chicago in 2014. It was manufactured within 44 hours using a large 3D printer right at the convention centre. The entire manufacturing process took only four months, from the first brainstorming session to the actual printing process. A quantum leap in comparison to conventional vehicles, whose development and production take several years.

No longer a distant prospect: electromobility and autonomous driving

3D printing will soon play a major role in creating parts and components, because it allows for a greater variety of variants and enables manufacturers to respond more quickly to individual customer requests. The problem with 3D printing, however, is that vehicles can be produced only one at a time; a fact that stands in the way of series production in the long term. This is why we are still quite a long way away from completely 3D printed cars. In contrast, electromobility and autonomous driving are technical innovations that are currently revolutionising the automotive industry. An increasing number of countries, such as Norway and the Netherlands, intend to ban the sale of vehicles with internal combustion engines as from about 2025. Against this backdrop and in combination with increasing tax incentives or bonus payments from the state, some countries will see electric vehicles developing first into a competitor and then into a no-alternatives replacement for conventional cars with internal combustion engines.

Autonomous driving is also within reach. For example, Google announced at the 2015 International Motor Show that its first self-driving car would need neither pedals nor a steering wheel – and is to be ready for the market in four years time. Autonomous vehicles will have an enormous impact on the entire industry, for example due to the fact that driving as such will take a back seat, while making good use of time during the journey will become more important. Offering customer-relevant connected car services is the prerequisite for making the best possible use of time spent in the vehicle. The car is thus no longer important as a product, but as part of the service provided to the customer.

Google and Apple are investing heavily in the development of self-driving cars. Similarly, Tesla and Chinese OEMs are challenging the established German car manufacturers and their suppliers. So far, it is impossible to predict how the focuses and market shares will change. That traditional automotive manufacturers will have to change their view of the competitive environment, however, is certain. The rise and fall of companies from other industries shows that forces in an ecosystem can change – keyword “Uber”. New competitors such as Apple or Google have a crucial advantage over the established car manufacturers: They do not have costly manufacturing plants or rigid corporate structures that are geared to production. Instead, they have the latest IT technology such as the cloud and big data. This makes it considerably easier for them to adjust to changing customer interests, to which they contribute, so to speak. 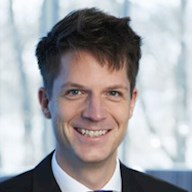 Between Motor and Mobility